[review] Pokéthulu; my first game as GM ever 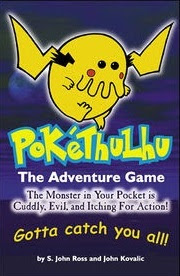 Little by little that need of making this review grew on me. This is a 19 year old game, with 0,0 active fanbase or discussion nowadays, but that I have very fond memories of. It was the very first game I ever GMed. I remember I convinced my friends to play rpgs around 2009 or so, and when they said yes, I went home and printed it on a whim to play that very afternoon. I read the manual as I went, and used the introductory adventure hooks at the end of the book (it was 20 pages or so) to improvise a campaign. I let everyone draw their first pokemons and we started. I don't remember many details, but I remember some.

I drew a handful of pokethulus in a few minutes. I just sketched some shits on a paper, then added lightning, horns, extra eyes, extra anythings, fire, water, wings, tails and random weirdnesses and they were perfect. I was into the mythos while my players weren't; but I made a lot of references to them anyways, with one of the toughest pokemon being straight up ripped from Hellsing's Baskerville (one of the PCs captured without combat, with a lucky roll of a pokéball throw). There was a mechanic that incorporated making up quotes for the pokethulu fictional show in exchange for ¿successes? but we did away with that completely. 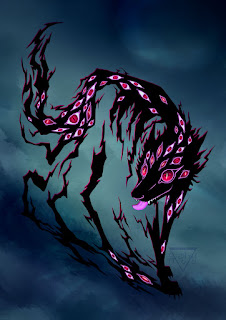 deviantart: geistvirus
The game counts itself as a joke game, but despite that it manages to accomplish a lot of things right. Common checks for humans are d12 roll under, with easier tasks giving you more dice to roll, while thulhu combat is really cool while remaining simple. Each thulhu has up to two types (decomposing, fishy, fungous, icy, luminiscent, non-euclidean, squamous, sticky), a weakness to one of those types and three stats: power, speed and hit points. You have four choices for attacks: injure, dodge, trap or frighten. Each of them has a type adequate to the thulhu  and a number from 1 to 3 d12 to roll, under power or speed.
The cool part is that you get to name/invent the nature of the attack, depending on the attack and its type. For example, the game lists Shub-Polywrath having a Non-Euclidean, frighten attack of 3d12. It is called Chest Swirl Display of Infinity. Mechanically it doesnt matter much: you'd roll 1d12 extra against targets who are weak to Non-Euclidean. But it is cool to know that if you choose to use your pet monster to frighten a clerk on some shop and succeed, the clerk is going to freak out gazing at infinity in the thulhu's spiral. There is a mechanical part which carries the rules, but is an analog, player made name which creates the effect. This is something that inspired me a lot and made the game very very easy to run. (The 3rd edition has an "official" pokethulu list, but when I downloaded it first there wasnt any, only a few examples)
I went as far as to implement Mythos-type magic when a PC found a forbidden book at the evil guy's lair. I gave his character a page with three spells that he could cast at anytime, each one once. I remember one of the spells "just" summoned a rain of blood. It was the kind of game that doesn't break for things like that. You can even play with the existing codes and give objects, places, people, etc types and weaknesses, such an squamous necklace or a fungous-averse library. But am digressing.

It is astonishing how both of the settings being mixed manage to answer the questions opened by the other. I have talked before on how Lovecraft's mythos are a great setting but hardly playable in my opinion in in a serious campaign. This joke game allowed me to play with them in a way that Call of the Chtulhu could not offer to me. In CoC, the King in Yellow is a book you read and makes you lose sanity, but you cannot really bring more info to your players about the city of Carcosa, the lake Hali or the King itself, as they are not described even in the books. You can only roleplay how your character goes slightly mad little by little. In pokethulu, you can rule that the King in Yellow is a book that allows passage to tattered Carcosa, where you can meet amd challenge the King, suffer or retrieve some eldritch items and maybe capture some horrible fish type critters at the lake Hali (If you survive)
On the other hand, it takes Pokèmon to its logical conclusions: What happens when pokemon turn against man? they eat their souls and marrow. Why kids get pokemon? because the world is hard and its always cool to have a friend with the destructive power of a nuke. Why only kids? Because you need a high sanity score to deal with thulhu and most adults (exception being some cultists) have a sanity score of 1.
The implications of a world where the kids hold a power like that while adults cannot handle this madness and pretend that all this pokethulu thing doesnt exist is really really poetical, almost sublime. It fixes all the problems that modern-based fantasy settings have on a single strike, and I want to go back to this on further entries. 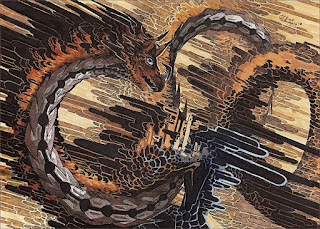 suddently, all my art folder looks like pokethulhus
On the bad side, it is true that the rules gave some trouble eventually. I don't remember exactly what happened, but we found a way to break the game easily; maxing out speed + trap or speed + dodge or something like that. I think it wasn't hard to fix. I am re-reading the rules right now, after all this years and having discovered the old school D&D, and I cannot help thinking on how I would change this or that rule; lots of great ideas.
* Stats for humans being rolled (1d12 with 9-12 defaulting to 4 instead of point buy). Buying stats at 11 or 12 made the characters auto succeed at everything from the start.
* human attacks (and other checks) being 1 dice only, lucky ability allowing 1 extra die + 1 extra if the task is easy or using an appropiate weapon or something, or taking advantage of somebody's weakness.
* Implementing hex travel, rations and pokethulu's travelling speed
* Statting pokethulhus a little lower; having 6d12 among attacks at the start for the some of the first owned pokemons is totally enough. We did it like this if I remember well. 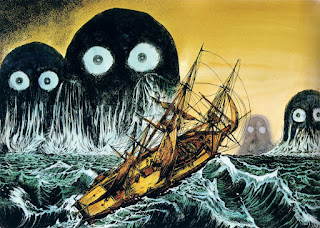 I ram him with the bowsprit! you throw the pokeball!
I must say that the game has always been free to download, but the official web seems down, who knows since when. You can get it HERE, and there is also a web with resources in HERE. Nobody seems to know or have played this game, but from my humble blog I'd like to reccomend it to you all. 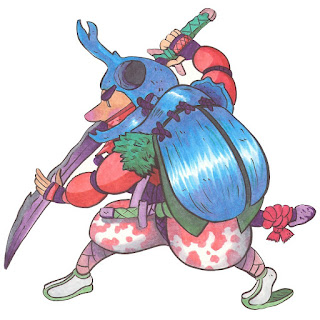 sometimes, the line between what counts as a
pokethulhu or a trainer is very thin. I could
make this guy into both sides with little effort.
Publicado por Jack Tremain en 19:56