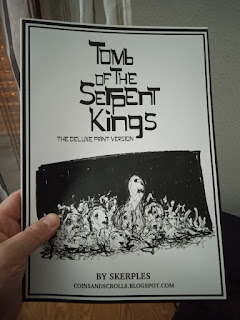 This just came in the mail today!
I remember watching a person some time ago in OSR forums, sharing this idea of an introductory dungeon: basically a dungeon designed to teach new players into the game, the same way that a tutorial stage eases you into a complex videogame. I loved the idea then and I do now. I now realize that person was surely no other than Skerples; one of the most productive authors of the OSR scene on diverse games or topics (medieval life, glog classes, etc). You can tell he puts lots of love and thought into things, or, at least, that is the impression it gives me. The text bricks in which he designs what was to be his latest, already published book (Magical Industrial Revolution) are a joy to read; surely one of the most original while gameable ideas I've seen for a setting (or have you ever seen magical preapocalyptic based game before?). Haven't read the finished book, though, but possibly will in the future.
I saw the module in the picture at a cheap price and I like to have physical books at home. You never know when you are going to need them!
The book is 24 pages long, which is enough for a detailed 3 level dungeon and a short bestiary with the monsters who appear in there (special mention to the skeleton jelly, a T-1000 type skeleton which just cannot be destroyed by normal means and must be lured into pits or similar. Very Prince of Persia). Every dungeon room has a description alongside a small note explaining which lesson does the room want to convey. The last two pages are a full map of the dungeon itself. 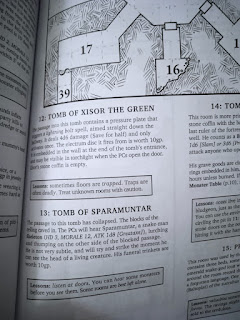 The art, on the other hand, strikes me as terrible and lazy. I could have understand it if it was personal art made by the book author (as in "I will just doodle something"), but not something I would commission. Honestly I think some functional small doodles over every monster would have been better. Watching more from the artist (Scrap Princess) tells me its her style, and I guess its a matter of opinion, but nonetheless this is mine.
I dont know if I will run this straight yet. Maybe. I have some potential "new players" in my campaign, so it could be a nice way to try it as it was intended to. I must say I have a personal problem with it because I also have a personal self-made low level dungeon which is also snake themed; and I feel that running one would make redundant to run the other. Luckily, the book provides an idea at the very start that could help me: 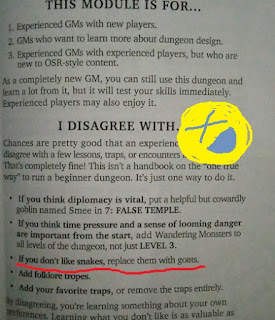 So, now its the time for my (sort of related) note on clerics:
We dont know much about the OD&D cleric's religion, as there are some details left for the players to fill up themselves, so to suit that dungeon I mention above (which holds some clerical relics) I made up a religion that is snake themed: Snakes are the symbol of their god or goddess. Whichever. The monks are required to sever up their eyelids to imitate the snake's eyes after a certain level (fun fact: snakes have no eyelids), and most of their time they go around blindfold, to prevent eye soreness. This grants them part of their powers (abstractly representing an increase of "true vision" type powers such as know alignment). Also it gives clerics a very distinct outlook.
The fun part is that it kind of suits the classic cleric's spell list; with spells like sticks to snakes, snakecharm and neutralize poison having now a good explanation in-game. It also goes very well paired with growth of animal if you happen to have a sacred snake or speak to animals if you want to befriend one. Snake poison can also play a very interesting part on the commune if you rule it to require a time spent in trance.
For now I have never have a cleric PC to use this rules, only passing NPCs. Who knows? maybe someday. 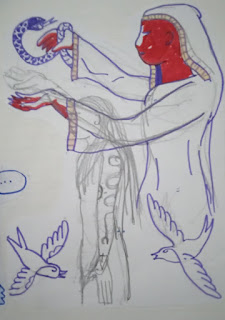